Fishing on the canal 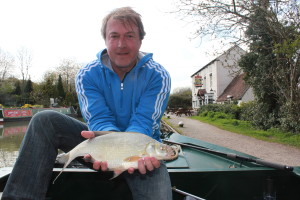 Many our customers bring their rods with them and at the end of days cruising will settle down to a bit of fishing. Information about licences can be found here:

The potential is huge – in more ways than one:

Fisheries experts got more than they bargained for recently when they discovered a monster pike lurking in the Ashby Canal.

Contractors MEM Fisheries Ltd, working on behalf of the Canal & River Trust, were carrying out a survey of fish within the canal when they found the giant pike which weighed in at a massive 32lb.

Becca Dent, angling development manager for the Trust said; “Pike are quite common on the canal network but to find one of this size is really exciting. It just goes to show that, whilst on the surface canals may seem serene, tranquil places, under the waterline they’re bustling with all sorts of life.

“The pike was a real beauty and I’m sure the thought of such a big fish swimming around the canal will make local anglers very excited indeed”.

The survey was looking into the population of zander in the canal – a non-native predatory fish that has a big impact on native coarse fish species. It forms part of a wider project, funded by Natural England, to try and protect the Ashby Canal from a number of harmful invasive species.

A section of the canal is designated as a Site of Special Scientific Interest (SSSI) as it’s a site of national importance for aquatic plants and the Trust is working to stop the spread of invasive species and improve important wildlife habitats on the canal.

Pike are the one of the world’s leading freshwater predators and can live up to 30 years of age. They mainly feed on smaller fish but have been known to eat frogs, mice and even ducklings.

The Ashby Canal is popular with anglers and much of it can be enjoyed cheaply and easily through the Waterways Wanderers scheme – a permit that gives people access to stretches of water not let to an angling club.